In the many years that Ray Brown made music, he played in every major night club and concert hall in the world. Recognized for decades as the world’s premier bassist, he performed with numerous recording greats including Frank Sinatra, Billy Eckstine, Tony Bennett, Ella Fitzgerald, Sarah Vaughan and Peggy Lee.

Born in Pittsburgh, Pennsylvania, in 1926, his formal musical training on piano at age eight. By the time Brown was in high school, he had already become an accomplished pianist. Thinking that the bass would be easier than the piano, Brown began playing it by ear and soon was playing professionally around town. After high school, Brown joined the Jimmy Hinsely Sextet and traveled with the group for six months. The following year, he joined the Snookum Russell band, playing larger clubs throughout the United States. He left Russell’s band at age 20 to make his way as a freelance musician in New York City.

Ray Brown’s reputation as an accomplished musician preceded him to New York. Immediately upon his arrival, he was asked by Dizzy Gillespie to play a rehearsal. Dizzy was so impressed with Brown that he hired him on the spot. He played in Dizzy’s band for the next two years with Charlie Parker and Bud Powell. His experiences with Dizzy Gillespie led Ray around the world, playing, learning and composing his own music. In 1948, Brown left the band to form his own trio with Hank Jones and Charlie Smith.

During those early big band years, Brown discovered Jazz at the Philharmonic—and was himself discovered by Norman Granz. Later in his career, Brown toured with JATP for 18 years, appearing in nearly every major club nd concert hall throughout Europe, Asia and the U.S. He met many musicians during his tour with JATP, including piano virtuoso Oscar Peterson, who made Brown a member of the Oscar Peterson trio until it disbanded in 1966. In the late ‘60s, Brown composed “Gravy Waltz,” a tune that won a Grammy Award and became the theme song to the Steve Allen Show.

Brown was the bassist for all of Frank Sinatra’s TV specials and was a part of some of the most outstanding television musical events in the business. He guided the Hollywood Bowl Association in producing jazz concerts, was Director of the Monterey Jazz Festival for two years, and was Music Director for the Concord Summer Festival in 1976 and 1977. He was the recipient of innumerable awards, including the All-Star Poll Award in Playboy nearly every year since its inception in 1958. He also amassed a series of Grammy Awards, Down Beat Reader’s Poll Awards, Jazz Critic’s Poll Awards and many others.

Ray Brown first appeared on the Telarc label in 1989 (with Andre Previn and Joe Pass) on After Hours. In 1993, Brown’s own trio with Benny Green and Jeff Hamilton recorded their first album for Telarc called Bass Face. In 1999, he won Acoustic Bassist of the Year again in Down Beat’s Readers Poll and later released Christmas Songs with the Ray Brown Trio, his first holiday recording as a leader.

He also joined forces with Oscar Peterson and Milt Jackson for 1999’s The Very Tall Band, a landmark collaboration recorded live at the Blue Note in November 1998. In 2001, Brown released the first ever Live at Starbucks album and SuperBass 2, another live recording, this time from the famed Blue Note in New York City. Bassists John Clayton and Christian McBride were featured along with Brown on SuperBass 2.

Brown died in his sleep on July 2, 2002, during a tour stop in Indianapolis—just a few days after the release of Some of My Best Friends Are…Guitarists, with John Pizzarelli, Herb Ellis, Russell Malone, Ulf Wakenius, Bruce Forman and Kenny Burrell. Guitarists was the fifth installment in Brown’s Best Friends series. Ray Brown, Monty Alexander and Russell Malone was released later that same year. A final Ray Brown Trio recording, Walk On (with pianist Geoffrey Keezer and drummer Karriem Riggins) was released in July 2003. 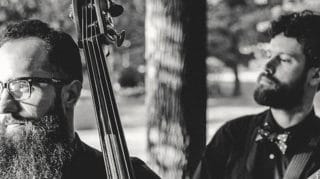 Remember when you might play in a 12-piece band, crushed on the bandstand in a hip little venue because the crowd was so packed and couldn’t stop dancing and sweating? Oh, sweet sweet yesteryear… Our Friend Claudio Marquez knows that feeling well. Claudio plays double bass and bass guitar in NYC’s Mod Society, which he…