A friendly giant built to be the ultimate low-range denizen of the bass section. Award winning 2013 ISB entry!

This instrument was built expressly for Richard Wagor, who had been searching for a very large orchestra bass (we should note – Richard stands six-foot nine). Around the shop it was nicknamed “Super Karr” as it began as a modified, stretched Karr pattern retaining excellent upper range access.

Highly figured Bigleaf Maple from the Pacific Northwest was used for the back and sides, from the trunk of a lightning-struck tree. Exceptional straight grain Spruce top, with one-piece flamed rock Maple for the neck. An adjustable neck was included, for Richard to transition between Classical and Jazz gigs on the fly, and the scroll is fitted with a Low B extension which leads to an astounding low frequency voice.

This instrument was entered in the 2013 ISB builder’s competition where it received two awards! 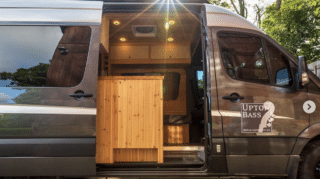 If you’re not an active follower of us on Instagram, or waiting for your bass to be finished, you may not know what we’ve been up to all summer! With COVID-19 we’ve all been hit with varying degrees of challenges, and getting basses to folks in a safe and affordable way has been a hassle.…