Located in the Burnett’s Corner historic district of Old Mystic, Connecticut, the Upton Bass barn brings back to life an important part of early American history when small groups of local craftsmen created things with their hands, not by importing low cost goods and just opening boxes.

When Gary bought the property that now houses the Upton Bass workshop, he did not plan on resurrecting a historic New England mill.  It was a thought he pondered as he came to learn the property, cutting back its overgrown vegetation and unearthing a collapsing stone foundation in the back corner of his land.  The stone pillars of the old foundation stood like monuments saying “once, long ago, something was made here by hand like nothing is today.”

As Gary searched New England for a permanent home for Upton Bass, he kept coming back to the stones, and pondering became questioning, and Gary said “what if?”

In 2010 he started serious research about what was here, how was the property used and when was it last used commercially.  Using this research, Gary petitioned the town, and with the support of the neighborhood, the town jumped at the opportunity to save a historic landmark.

In 2012 he broke ground and started the project, and the barn was raised in August of that year.  The workshop was moved in October to the post and beam home Gary created for Upton Bass, and once again, things were made here by hand.

A timeline of land use:

1817: Enoch Burrows purchased 10 acres of land from John Hicks.  He built two houses, a factory and a dye house.

1834: Enoch Burrows sold land to John Hyde containing 2 houses, a woolen factory and other buildings with machinery of all kinds.

Unknown: Silas Waltrous sold the property to Joseph A Lamb who rebuilt the factory and turned it into a shoddy (reclaimed wool) factory.

1910: T.N. Dickinson began using the factory for distilling birch bark used for a flavoring and medicinal purposes (smells like wintergreen).

Enoch Burrows purchased 10 acres of land on both sides of the road from John Hicks and built the previously mentioned mill and 2 dwelling houses, 1 on each side of the road. These homes were rented out to the workers who ran the mill. When he sold the property to John Hyde in 1834 he sold both houses. When John Hyde sold the property 4 years later he divided the land this house was sold separately. It was sold to the Wilbur family in 1944 and stayed in that family until 1964.

On April 1, 1817 Enoch Burrows purchased 10 acres of land near Burnett’s Corners from John Hicks. There he built two houses and a factory and dye house. He went into an agreement with John & William VanBuskin of New York City who owned ¼ of the property but they defaulted in 1824.

In 1834 when he sold the land to John Hyde it contained “2 dwelling houses, a woolen factory and other buildings with all the machinery of every kind belonging to said Factory” John Hyde kept the property only 4 years and sold it in 1838 to Silas Watrous. During this time the mill burned.

Silas Watrous sold the property to Joseph A. Lamb who rebuilt the mill and turned it into a Shoddy factory. Shoddy is reclaimed wool especially that obtained by garnetting or pulling apart of soft rags from worsteds or from knitted or loosely woven woolens. It is distinguished from mungo by length of fiber and by superior quality of fabrics manufactured from it.

It was sold again in 1881 to Ruben Palmer and was known as the Palmer Quilt Factory. This mill burned in July 1885. The mill was rebuilt and by 1907 T.N. Dickerson rented the mill for manufacturing witch hazel. Mills would be set up near an area where the witch hazel shrub was plentiful near a good water supply.The mill owners bargained with the landownerrs to give them permission to enter their land and cut the brush, for which the landowners would be paid. The brush was brought to the mill and cut into chips, later on, cutting machines were used. When the supply of witch hazel brush exhausted, the mill would move on to another site.

The New London Day of May 4,1910 reported “T.N. Dickinson’s is getting the mill at Burnett’s Corners in condition for the distilling of birch bark. The mill has previoulsy been used to for distilling witch hazel. The oil that is extracted from the birch bark is used for flavoring and medicinal purposes and resembles wintergreen so closely in taste that it is often dispensed by retailers as such.”

In 1910 this mill moved on to Poquonnock Bridge.

Today the stone work of the mill and what may have been the dye house still remain along with the two dwelling houses. One house on the side with the mill site and the other on the opposite side of the road. 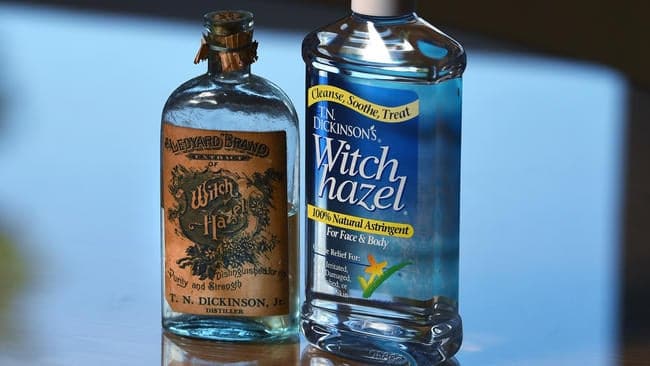