The name Abraham Prescott is to double bassists what Stradivari is to violinists.

Are you intrigued by the Prescott double bass? Prescotts have been owned and performed on by some of the most celebrated orchestras and bassists in the U.S., including the likes of Scott LaFaro and Arvel Shaw. Highly sought after and prized for their both beauty and tone, Prescott contrabasses are not coveted just for their name but for the quality of their construction.

Prescott was born in Deerfield, New Hampshire in the late 18th century and made his first bass in 1819. Together with his apprentices, he built over 200 upright basses and countless “church basses,” cellos, violins, and even keyboards and wooden pipe organs. Abraham began his own apprenticeship in his uncle’s woodworking shop, and taught himself viol construction by working on his own violin. He soon was building viols for local churches and musicians. These early “Deerfield” Prescott’s show quite a bit of individuality from instrument to instrument as the young maker improved at his craft.

After making hundreds of upright basses in our Connecticut shop and working on, restoring and selling numerous Prescotts, a thought occurred to us – why haven’t we made a version like this and why are we just now realizing it? How could we be New England makers without making a New England double bass?

Gary Upton and Eric Roy began plans for a Prescott-style double bass in the spring of 2012. Their central goal was to build a Prescott pattern with modern ergonomics from our finest stores of seasoned spruce and big leaf maple. The result was the Concord Model, with scores of custom versions built in its first decade. Our New England flagship!

Sloping shoulders (the same upper bouts as our Gary Karr Model), Busetto corners, Prescott ff-holes, flat maple back and sides (many grades available) with deep ribs (lined outside) and a deluxe spruce top combined with a finely detailed scroll, button and hand-cut tuners pay homage to Prescott while keeping with our own modern New England aesthetic.

Tonally, this bass is similar to our Brescian Model – deep, dark and punchy with rich, pipe organ lows under the bow. The Concord pictured is a large 3/4 instrument, it can also be built in 7/8 or 4/4 sizes. The standard build (only available as a fully carved instrument) includes a solid wood flat back of moderately flamed American maple (authentic Prescott) starting at $10,500. Fully carved round-backed Concords start at $20,000.

CLICK HERE TO SUBMIT AN INQUIRY FOR YOUR CUSTOM UPTON BASS! 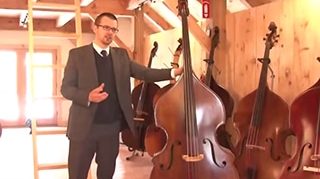 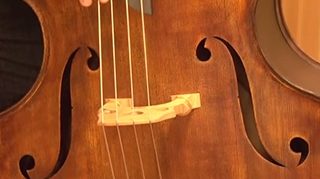 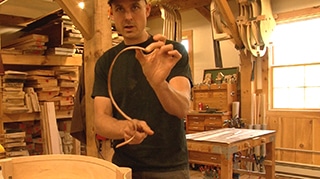 Building a Concord with Eric Roy 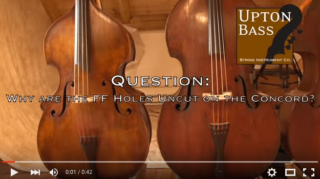