Craig Butterfield is an Associate Professor of Double Bass at the University of South Carolina who pushes the boundaries of modern double bass with effortless lyrical musicality. During 2004 and 2005, he toured with the legendary jazz trumpet player Maynard Ferguson. As a member of Ferguson’s Big Bop Nouveau band, he performed in some of the most famous venues in the world, including the Blue Note in New York, Ronnie Scott’s in London, and the Bangkok Cultural Arts center as a special guest of the King of Thailand. A week at Ronnie Scott’s in London was recorded and released as Maynard Ferguson’s final live CD entitled MF Horn 6. He has been a guest artist at the San Miguel International jazz festival in Mexico as well as the Ollin Kan world music festival in Mexico City. Dr. Butterfield has been active in the studio as well, appearing on several jazz CDs as both a performer and as a producer with artists such as Steve Weist, Chip McNeill, and David Braid. Most recently, he performed as an artist and clinician in South Korea and Japan. In the classical field, Dr. Butterfield has performed concertos and given masterclasses and recitals as a soloist in many concert halls and universities throughout the United States. He is a member of Dez Cordas, an unusual duo of classical guitar and double bass. The busy schedule of Dez Cordas includes presenting more than 20 recitals and masterclasses a year. The duo’s first recording, Dances, Songs, Inventions, was released by Centaur Records in February 2010. Butterfield has been invited twice to perform recitals as a guest artist at the semiannual International Society of Bassists convention and has given presentations at the American String Teachers Association and the Violin Society of America national conferences. 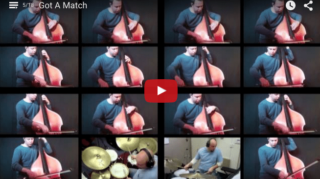