In 1998, he accepted an offer to teach at the world famous University of North Texas, home to one of the largest jazz programs in the world, where he continues to teach and perform to this day.

We met Lynn at the 2009 ISB conference and struck up a friendship immediately! At one point Lynn was going through all of the Upton Basses we had brought for display, pointing out what he liked about each one while Gary Upton Birkhamshaw took careful notes. A few days later, Lynn brought his own bass over to Gary and showed him what he liked, and didn’t like, about his own bass. Gary and Eric took some notes and measurements off of the bass and upon their return, designed an Upton Bass that hit upon every note and detail of their meeting. Initially the bass was going to be called the “Seaton” model, but we decided instead to mark the opening of the new Boston Showroom and called it the “Bostonian”. Today a number of Lynn’s UNT students own Bostonians (as well as many other Upton Basses!). 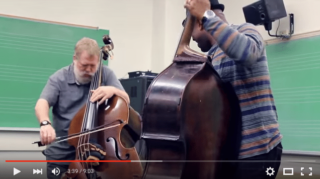