Steve Millhouse is an electric/double bassist currently playing for the Broadway Musical Godspell in New York City. He also plays for the Radio City Music Hall Christmas Spectacular. Steve has played for many other Broadway productions; Grammy nominated recordings; national TV jingles; concerts with film, TV and movie stars; and with Japanese pop star Oe Senri. Since 2009 he has been touring the world with international star Ute Lemper. He also plays in various jazz, rock and singer/songwriter clubs around New York City.

Steve needed a good bass that could withstand the rigors of Radio City Music Hall’s Christmas Spectacular as the venue is known for destroying instruments (thousands of people breathing and sweating in a venue several times a day for weeks on end can result in horrendous humidity cycling for an instrument). A Hybrid was made as the perfect balance between tone and longevity, and it has survived ever since! 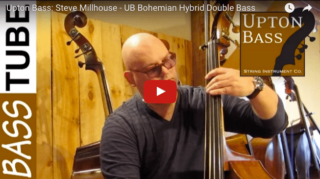