In 1967, Gary Karr started what has become the International Society of Bassists, and the 2017 ISB Convention in Ithaca, New York marked its 50th anniversary with a very special performance by its founder.

Gary wrote to us several months before the convention to let us know what a joy it was to perform a concert on the Karr model we built for David Murray in 2013, and he hoped we would have one with us in Ithaca for him to perform on!

We were honored to be asked, and we set out to build a very special, 50th Anniversary bass that Gary could use exclusively for 2017 ISB concerts throughout the week.

Build Notes:  When you set out to build a special Karr model for the use of Gary Karr himself, you dip into your reserve stock of woods!

Highly flamed Ash from Germany was used for the fully carved back and sides, not only for its dramatic aesthetics but for the warmth and depth it lends to the low end, letting everyone know this is a bass that can sing solo or anchor an orchestral section with grace and ease.

A fine grain German spruce top was selected, and what was a pinpoint of a knot in the edge revealed a knot shadow in the re-curve like Marylin Monroe’s beauty mark.  Who’s to argue beauty?

A removable/adjustable neck was incorporated in line with Gary Karr’s thoughts on bridge adjusters coloring the tone in an unfavorable way.  Accents of Black Walnut were used in the heel & button, as well as the custom tailpiece.

Varnished to match our opus #2 Montagnana cello and polished out to a natural sheen, the bass invokes the feeling of a bass made centuries, not days, before its inaugural performance.

Setup:  This bass was solo tuned during the ISB week and set up to Mr. Karr’s specifications:  41.75″ string length and Eb neck BUT being a removable neck instrument, a D neck could be crafted.

Commissioning: As this bass has been sold, we have been commissioned numerous times to copy it with some guidance from the commissioners.  A superb example is the “Spencer” Karr model seen here. 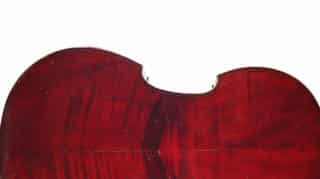 From Gary Karr’s French bass to the stately JTLs, here are a few of the stars everybody gravitates to here in the Upton Bass loft! Our big Martin 4/4 seeks a good home and is on deep sale – it spent it’s formative years pushing the Frank Sinatra Jr. big band. The French Mentec was…