Ambrham Prescott Bass Violin,  Double Bass made by Abraham Prescott of Deerfield and Concord, New Hampshire.  Made in the first half of the 19th Century.

Abraham Prescott (1789-1858) A young Abraham grew up just over the Massachusetts border in  in Deerfield, New Hampshire where he often worked in his Uncles woodworking shop.  At an early age it is believed he took up the violin and learned about the construction of orchestral stringed instruments from his own fiddle.  It is thought he began making fiddles at a very early age and soon switch to building viols for local churches and musicians.  These early “Deerfield” Prescott’s show quite a bit of individuality from instrument to instrument as the young maker was perfecting his craft and refining the models.  Based on the great variety of instruments made, along with the tales the instruments tell us when examining the construction, Prescott was working without forms and templates.  His business grew and the addition of workers (Dearborn Brothers) began Prescott as more of a manufacturer of instruments.  The Dearborn’s had perhaps some better training and the instruments made during this time have a greater sense of refinement.  In the early 1830’s Abraham moved the workshop from Deerfield to Concord, New Hampshire to expand his production and by the mid to late 1830’s began the construction of Melodians and eventually Organs.  By 1850 Abraham retired and left the business to his sons and in 1858 the firm became The Prescott Brothers, and it may be that the string instrument portion of the business was sold off and/or continued by the Dearborn Brothers under their own name, but the production of orchestral instruments appears to have been over by the 1860’s?  In the 1870’s the business became the Prescott Organ Company but by 1886 Organs had been all but sidelined as the production of Piano’s was in full swing so by the 1890’s the Prescott Piano Company became the official name with the listed officers being Willis Thompson (President) and George D.B. Prescott (Treasurer).  In 1896 the Concord facility was completely lost to fire and a new workshop was equipped in a warehouse close to the original workshop. The company had a large distribution and dealer base throughout North America but eventually was out of business around the 1920’s. We believe this Prescott Double Bass is a early 1820’s Prescott made in the Deerfield, NH workshop.  The instrument has a greater sense of refinement than some of the early Prescott’s that can have huge or
awkward scrolls but still has the extra turns and of his early church bass instruments.  The ff holes show more refinement and examination of the ff holes shows clear evidence of the “tabs” being cut and the lopes reshaped to a more “Italian” style.  The outline of the ff holes follows other well known Prescott’s and have been largely unmodified.  The instrument maintains the individuality of an instrument created without internal forms and closely follows the outline measurements of some smaller Prescott’s (we have documented three distinct sizes of Prescott Double Bass Viols).  The bass was fully restored by Jeff Bollbach during which time a new back was created for it (The back at the time of restoration was a plywood back most likely made by Peter Kaufmann (sp?
& heresey)…this was a very common thing to see on basses from this region as it is believed Peter did this to a great many basses (we have seen three…all Prescotts!!!), as well as numerous other repairs.  Jeff was nice enough to call us about the bass and is sending us the original tuners, three of which are original to the bass from when it was a three stringer.  Also Jeff mentioned that before he did a check graft to the scroll, you could still see the score of the knife tip where the original inlaid tuner plates (stinger style) once sat.  During it’s last restoration
by Jeff, individual Rubner tuners were installed to the pegbox after the cheek grafts had been performed.  This instrument has been in various shops over the past few years for sale or evaluation before coming to Upton Bass.  A few items needed correction before going on our showroom floor, and we decided that $100 Rubner tuners, although reliable, were not fitting the basses potential, so we cut brass plates similar in style to Prescott’s and outfitted them with Sloane tuners
from David Gage.  A new Bridge, Fingerboard, Nut and
sound post were put on the bass as well and now this bass has one of the all time best double bass tones we have ever heard
(bested only by Gary’s Klotz!).  It simply makes you smile to play it! 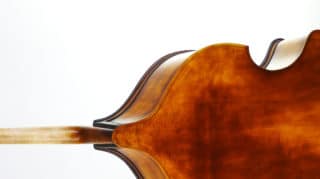 It’s getting chilly and leaves are turning, how about a nice New England-style Concord Upton Bass, made with our hats tipped to the luthier Abraham Prescott, and his school of double bass making…with maple?