On Saturday, November 16th we were treated to a very intimate performance by Lauren Pierce. Her passionate playing and openness with the audience will live on in many memories from that evening.

For those that couldn’t attend, let us take you into the week…

Lauren landed into Providence, RI and Gary went to pick her up. While Gary was driving, Eric told Gary he had a dream that the neck broke in transit, and Upton Bass would have to pull off around the clock workshop shifts to scroll graft it in time for the concert.

Gary let the dream “slip” into Lauren’s ear as the case came off the conveyer belt. To say she was nervous opening the case is an understatement!

Later that night, Gary was examining the bass and noticed the tuners were nothing exciting. Common plate tuners were cut and modified to fit the scroll. They were difficult to use, and rattled, so new tuners were definitely in order!

The next morning in the workshop, Gary grabbed his phone and started a full tour of the bass…

Work began immediately, and we laid out the new tuners, taking the opportunity to reverse the gear orientation, but the scroll needed help! We were pinched for time. What to do?

We decided we could outfit the scroll with custom brass plates in a timely manner, so the workshop got started…

Sometimes something sounds like a good idea, but they’re not quite right in the end.

The brass plates made the scroll too heavy and caused Virginia to tip, and they looked gaudy on the petite bass.

Ugh. So little time left before her performance…

The right answer was cheek grafts.

While not a technically challenging repair…it is time-consuming with several glue times involved, and it must be done with extreme precision.

But, Virginia was worth the effort, and with just 24 hours to go till showtime, the workshop began prepping for an all-night push.

The bass went from the setup bench to the photo booth for a full shoot (pics to come!) and then right into Lauren’s hands just in time for her final rehearsal…which Lauren did LIVE!

It was an honor to host Lauren (and Virginia) for the week! Her playing was inspiring for all, and we can’t wait to show you more from her visit! 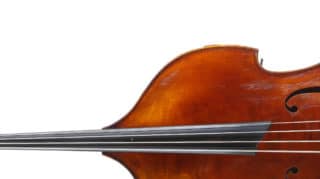