This particular bass was owned and played by nationally renowned bassist Leslie “Tiny” Martin, member of the Boston Symphony Orchestra from 1957-1989 after touring in his early career with Gene Krupa, Ted Weems, and Skinny Ennis.

This large pattern American classic was built in Concord, New Hampshire towards the end of Abraham Prescott’s string instrument building phase as he and his sons transitioned exclusively to church organs.

Remarkable flamed sugar maple flat back and high arched top with original connected ff-holes. Well done strong condition neck graft (full original scroll), otherwise amazingly original – many of these large pattern Prescott’s have been cut down and heavily modified, not so here. Truly an acoustic instrument deserving of moving concert halls, ready for its next chapter.

***This bass has become part of our collection and is no longer available for sale.

The Abraham Prescott double bass is an early American classic, one which can still be found in concert halls around the world. Based on the great variety of instruments made, along with the tales the instruments tell us when examining the construction, Prescott was working without forms and templates.  His business grew and the addition of workers (Dearborn Brothers) saw Prescott become more of a manufacturer of instruments.  The Dearborns had perhaps some better training and the instruments made during this time have a greater sense of refinement.  In the early 1830’s Abraham moved the workshop from Deerfield to Concord, New Hampshire to expand his production and by the mid to late 1830’s began the construction of Melodians and eventually Organs.  By 1850 Abraham retired and left the business to his sons. In 1858 the firm became The Prescott Brothers, and at that time, the string instrument portion of the business was either sold off and/or continued by the Dearborn Brothers under their own name, however the production of orchestral instruments appears to have been over by the 1860s?  In the 1870s the business became the Prescott Organ Company but by 1886 Organs had been all but sidelined as the production of pianos was in full swing. By the 1890s, the Prescott Piano Company became the official name, with the listed officers being Willis Thompson (President) and George D.B. Prescott (Treasurer).  In 1896 the Concord facility was completely lost to fire and a new workshop was begun in a warehouse close to the original workshop. The company had a large distribution and dealer base throughout North America but eventually was out of business around the 1920s.

Leslie R. Martin, a bass player with the Boston Symphony Orchestra from 1957 until his retirement in 1987.

Mr. Martin was known in jazz and symphonic circles from coast to coast as “Tiny”, a nickname that belied his size and spirit.

Born in Seattle, he began his classical music career at l0 when his father, also a bassist, gave him his first instrument. At 16, still in high school, he was a member of the Seattle Symphony. Upon graduation he toured with the jazz bands of Gene Krupa, Ted Weems and Skinny Ennis, returning to Seattle in 1947 as principal bassist in the symphony.

After studying at the Cornish School, Seattle’s music, art and dance school, and the University of Washington, he became principal bassist of the Berkshire Music Center Orchestra in 1950. 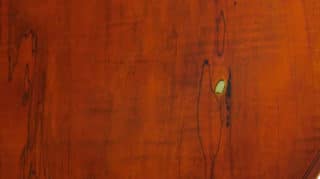 Luthier’s notes from Eric: “Most amazing Brescian yet! Deep ribs (almost 9″!) spalted big leaf Maple that kept ruining blades as it had a bullet in it!” We imagined several stories – was the tree outside Elvis’s window? Was the lumber in the trunk of Steve McQueen’s Mustang? The depth in the wood and pathless…