This fine double bass is a small-ish three quarter size violin shaped
instrument with nicely flamed maple back & ribs. The three piece
slab-cut spruce top with painted purfling is typically Italian. The
neck is a replacement made by William Merchant.  Bill found the
bass with a later “folk head stock” but with the original three gears.
It is now fitted with those gears, plus a later Nineteenth Century
fourth gear. The bass has a 41 1/2″ string length with an E flat neck.
The over-stand was set higher so that the upper register is quite
accessible despite the violin shaped shoulders. The varnish was
restored by Bill to the original “dragon’s blood” red- and there are
many large patches of the original varnish that were used to match to.
The bass was made in the mid to end of the 18th century.
Some remarks from Bill about the
interior of the top: “The bass’s top has an original, long flat
strip that centers under the sound post as a smaller analogy to the
bass bar. The bass bar is the original. There is a compass drawn circle
in pencil under both these bars. The center of that circle corresponds
to the sound post center placement and the bass bar has its deepest
part at that same point, not under the E bridge foot as is usually
found. There is a small mark on the inside of the back’s center seam
that corresponds to the center of that top circle, too. These marks
taken together show how the luthier was apparently doing his work with
the center of the sound post as the location point.  It was
obviously made by a confident luthier working within a well established
tradition- it is unlikely it was their only instrument. The bass plays
& sounds as well as any I have encountered.”

Please call us if you have any questions about this instrument :
860-535-9399 or sales@uptonbass.com 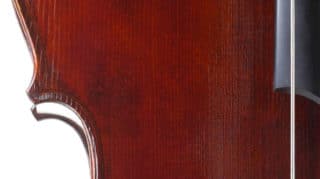 A mighty, well-mannered Brescian Model, built with some mild outline adaptations as we continue our pursuit of the ultimate double bass! The upper bouts stayed largely the same, but with just a bit more slope to the shoulders to aid access into thumb position. The longer C-bouts bring the lower corners further from collision with…