Leroy F. Geiger was born in Grinnel, Iowa around 1900, and first worked in
Chicago, Illinois starting in 1919.  Geiger moved to Chicago and John (Johann)
Hornsteiner (III) taught Leroy Geiger violin making at Wm. Lewis and Sons.  The
original name of the firm was Root and Lewis, and the business operated between
1874 and 1978.  Studying makers in this school is best way to find information
on Geiger.

John Hornsteiner (III) was born in Germany in 1863 and was taught violin
making by Joseph Kriner, who worked from 1850 through 1859 in Landshut,
Germany.  John (III) was part of a long tradition of German violin makers that
leads back to Georg Hornsteiner, who worked in Mittenwald as early as 1730.
John (III) was the only violin maker in the Geiger clan to immigrate to the US.
He worked in Chicago Illinois up to 1924.  He is credited with 315+ instruments,
and worked with many fine dealers.  The auction value of his violins is listed
at $3 to $4.4K.

There are a total of four students of listed for John Hornsteiner (III) in
Chicago early in the 20th century.  John (Johann) Hornsteiner (III)
Students, Along with Leroy Geiger, there was Frank Sindelar, the inventor of
Super Sensitive strings.  Sindelar personally made 340+ instruments.  Frank
Kovanda is a notable bowmaker for Lewis and Sons, with auction record over $1.5K

The most notable of many fine makers who worked under Hornsteiner is Carl G.
Becker, who completed his first violin under the tutelage of John (III) at the
young age of fourteen, in 1901.  Becker and Hornsteiner worked together for 22
years, until Horn- steiner’s death in 1924.  Auction estimates for Carl G.
Becker Violins are $25K to $30K.

Leroy Geiger worked along side Becker at William Lewis and Sons from 1919
probably through 1924. In 1925, the firm of Voigt and Geiger was formed in
Chicago, a partnership between Anton D.Voigt  (Voit) and Leroy Geiger.    Anton
may have been the son of William Voigt, who shows up as a maker in New York in
1906 through 1916.  William is listed as first working for Carl Fischer, ten
starting his own shop.

Leroy Geiger also authored the book “How to Make Your Own Violin“,
published by Ernst Heinrich Roth Company Inc. Cleveland, OH, published as a
spiral bound book in 1963.  It is Subtitled, “How To Make Your Own Violin.
Step By Step Instructions, With Illustrations For Hobbyists, Amateurs and School
Workshops”.  This volume is now a prized antique.  This work may have
been published posthumously, as the 1963 publishing data come after the 1959
date of death.

Leroy Geiger worked along side Becker at William Lewis and Sons from 1919
probably through 1924. In 1925, the firm of Voigt and Geiger was formed in
Chicago, a partnership between Anton D.Voigt  (Voit) and Leroy Geiger.    Anton
may have been the son of William Voigt, who shows up as a maker in New York in
1906 through 1916.  He is listed as first working for Carl Fischer, ten starting
his own shop.
There were 2 VOITs (Commonly misspelled VOIGT or VOIGHT) working in Chicago
around the 1930’s: Both were German Immigrants, brothers, the father being Karl
Voit, also a known violinmaker from Germany but never leaving the country.

Iv’e also found reffrences to a “Voit Brothers”, possibly being the source for
some early Kay parts, specifically scrolls and then scroll ears.  Not a far
stretch to say it is these brothers, and the Klusson shop also being in Chicago
adds to the plausibility of a Kay connection.  More plausible is that the early
Kay necks were German import Hornsteiner’s with the Voit’s as middle men as we
have always believed the early Kay necks to be German made.

I believe this bass to be a Hornsteiner built bass made for Voit & Geiger,
being one of less than a dozen ever made and affectionaltey called “Pancake”
basses by those in the business.  My first impressions upon seeing it was German
Workshop, looking very “Wilfer-esque”, but not having the “French” line of the
re-curve at the neck plate on the top on a Wilfer before.  I think the
workmanship and details of the bass coupled with the ties of Geiger working for
Hornsteiner just before immigrating to the US places a very strong plausibility
that that is the source.  I have read numerous accounts from well known violin
makers/dealers in reference to violins labeled as “Voit & Geiger” as being
German made and labeled here once imported, and it appears that after WWII the
labels did indeed say MADE IN GERMANY.  I did not find anyone specifically
stating a source factory in the violin world, lots of speculation about Roth &
Hornsteiner as well.

Wilfer made about 6 or so basses for a custom order around 1960 for Voit &
Geiger, and I found reference to a Voit & Geiger “Pancake” bass dated 1962.
The 1960’s Wilfers are identifiable by a more orange, shinny varnish that is not
as pleasing.

Currently the bass has an adjustable Aubert bridge and mixed wound/plain gut
set.  A new bridge will soon be fit with adjusters and new Evah Pirazzi
strings will be installed.  The bass is otherwise very well setup and in
very good health.  The string length is 42.5″ and the checks of the scroll
have partially broke free and been repaired with an inlaid nut.  The bass
is valued at $15K but we have discounted the bass the cost of a neck graft
($3K).  We feel a neck graft would be a good idea which would allow the new
owner the choice of a modern string length, as well as the option for having a
bolt in neck (Something I think Voit & Geiger would consent happily to!).

This is a  very attractive and good sounding bass with a small bit
of historical significance to a collector.  Don’t let the thin ribs fool
you…blindfolded I doubt you could pick out this bass from a full rib depth
bass. 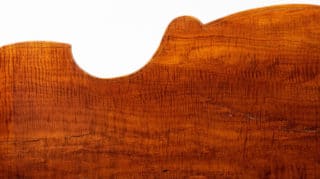