What’s old is NEW again! Includes full setup, adjusters and Helicore strings.  In stock ready to ship, no waiting to be built.

In the beginning there was darkness…

Ok, not that dramatic…but there was a serious lack of nice sounding, easy to play entry or student level double basses available.

Over ten years ago Upton Bass String Instrument company made it’s mark on the double bass world by importing a quality made double bass from Europe. Buying double basses direct from the workshop as “shells” allowed Upton Bass to completely setup the basses in house. This was a new concept in it’s day as most shops just sold factory basses with the factory setups. Double Bassists from students to professionals now had the opportunity to buy value minded basses with professional level setups and top notch setup parts. The bar was raised, and other shops had to follow. Upton Bass then began to buy the basses from Europe “in the white” and varnish them in house, giving customers the ability to get a bass varnished the way they wanted, and thus began the “custom” bass buying experience previously only available in the handmade, $20,000.00 plus market.

Gary, Eric and Jack sat down with a pad of paper and went through what was important to them and Upton Customers about a double bass and drew up a spec sheet of what a true Upton Bass would be. They then got a GIANT roll of paper and drew out 1:1 an Upton Double Bass. Every measurement, every detail, every millimeter was agonized over until a “blue print” was finished. This blue print would serve as the build sheet for their ultimate dream…to build a quality double bass right here in the USA! But, initially the cost of doing so looked prohibitive and the research and development of the manufacturing process too daunting, so they sent the blue print (minus the scroll! The unique UB scroll was kept as a secret only to be used on the American made basses!) to the European workshop and asked them to build the bass. A few months later, the first UB designed double basses came over the Atlantic and into the hands of our customers.

During the first few years of the European Upton Basses the cost of the Euro kept rising, gas prices went through the roof and trade agreements ended, pushing the landed cost of the European basses higher and higher. Gary kept putting pencil to paper and decided it was feasible to build a quality made double bass right here in America.

Jump forward to 2010 and we find ourselves pulling out of the second worse economic meltdown since the great depression. Money is tight for almost everyone and this has pushed for an entry level bass in the sub $2,000.00 range. Poorly made Chinese basses are on the rise and spin offs from well known Chinese factories are making their way into the marketplace. So…once again Gary put pencil to paper and picked up the phone and called the European workshop. They still had our plans and the forms they made…so Gary ordered a SMALL quantity of white European Laminated Upton Basses to see how customers reacted to them. We varnished them with an “antiqued” finish and set them up with a Jazz/Orchestra player in mind with Helicore Hybrid strings and bridge adjusters. The tuners, end-pins, bridges, sound-posts and ebony components are the same high quality parts found on every Upton Bass. No corners were cut, no skimps were made. 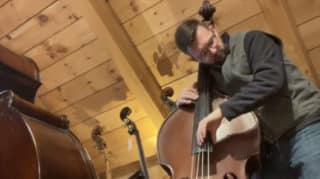